The cloak of invisibility

Mablink Bioscience is developing a new generation of anti-cancer “missiles” that are up to 10 x more effective thanks to a “cloak of invisibility” that allows them to reach their cancer targets without being eliminated by the liver’s filtering cells.

Unlike chemotherapy and radiotherapy, which do not distinguish between good and bad cells, these missiles allow cancer cells to be targeted with great precision, thus sparing healthy cells as much as possible.

In targeted therapy, ‘missiles’ (called Antibody Drug Conjugates or ADCs) consisting of a homing head, a link and a load of toxic agents are injected intravenously to latch onto their targets (specific antennae on the surface of cancer cells) and destroy them.

The problem is that these missiles and their toxic cargo are transported by the blood and pass through the liver, which may filter and eliminate them, reducing the strike force and causing unwanted liver poisoning.

Using its own technology platform, Mablink Bioscience has designed a “cloak of invisibility” that envelops the cytotoxic load and masks it from the filtering cells of the liver. 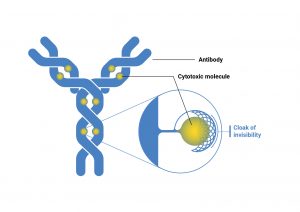 With this cloak and the associated technology platform, Mablink has been able to complete the development and preclinical proof of concept of these next generation ADCs in just two years.

Initial results indicate that this technology has a 7 to 10 times better efficacy/tolerance ratio than conventional ADCs.

After very positive results in the preclinical stage, the goal is to bring this project to the clinical stage, where it could benefit the first patients.

In April 2021, Mablink Bioscience received a first support from the Foundation of EUR 500,000.
In October 2021, an important licensing agreement was signed between Mablink and the biotech Emergence Therapeutics, allowing the targeting of more cancer types with this new generation of ADCs equipped with the cloak of invisibility.

The Scientific Council and the Board of Directors of the Foundation have decided to strengthen their support for this project. To do so, a Series A fundraising will be necessary and the Foundation should contribute EUR 880,000 to ensure its success.

This website uses cookies to improve your experience while you navigate through the website. Out of these cookies, the cookies that are categorized as necessary are stored on your browser as they are essential for the working of basic functionalities of the website. We also use third-party cookies that help us analyze and understand how you use this website. These cookies will be stored in your browser only with your consent. You also have the option to opt-out of these cookies. But opting out of some of these cookies may have an effect on your browsing experience.
Necessary Always Enabled
Necessary cookies are absolutely essential for the website to function properly. This category only includes cookies that ensures basic functionalities and security features of the website. These cookies do not store any personal information.
Non-necessary
Any cookies that may not be particularly necessary for the website to function and is used specifically to collect user personal data via analytics, ads, other embedded contents are termed as non-necessary cookies. It is mandatory to procure user consent prior to running these cookies on your website.
SAVE & ACCEPT