Project from 2020 Allocated sum in discussion

The cells of some cancers have the particularity of making a protein, TSP-1, in very large quantities. These position themselves around the cancer cell and form a cloud-like mass that disrupts our immune system and renders it inoperative.

Colorectal cancer and ovarian cancer often use this defensive tactic.

Apmonia Therapeutics has designed a product that will literally latch onto these clouds and chase them away, allowing our immune system to spot the cancer cells and eliminate them. This is a very promising immunotherapy.

In 2020, colorectal cancer affected 519,820 people in Europe. Ovarian cancer affected 66,693 women (source: WHO-Globocan), with a prognosis that remains extremely sensitive: almost 1 in 3 women do not survive.

The hope of immunotherapy

In order to fulfil different survival functions (e.g. creating blood vessels, activating growth), the genes of a tumour produce proteins. Depending on their nature, these proteins are sometimes located inside or outside the cell. In ovarian and colorectal cancers, TSP-1 proteins are produced in very large quantities and, like a cluster of clouds, they are positioned around the cell.

Our immune system has various soldiers, including T-cells, whose job it is to destroy abnormally functioning cells, such as cancer cells. These soldiers are equipped with antennae (one of which is called CD47) to detect targets for attack. Lost in the clouds formed by TSP-1 proteins around the tumour, the soldiers cannot go into action.

Apmonia Therapeutics has developed an immunotherapeutic treatment that specifically targets these clouds. The product, called TAX2, clings to them and then allows the soldiers’ antennae to function normally, locating and attacking the cancer cells. 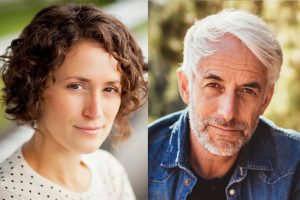 Karine is an alias for the many patients affected by ovarian cancer. Henry is the name of the colorectal cancer patients. For them, Apmonia’s solution could provide an innovative therapeutic response.

For all the “Karine” and all the “Henry”, the Foundation has chosen to support a large part of this promising project, by providing in a first phase €375,000 needed to reach a key stage in the development of this future treatment.

This website uses cookies to improve your experience while you navigate through the website. Out of these cookies, the cookies that are categorized as necessary are stored on your browser as they are essential for the working of basic functionalities of the website. We also use third-party cookies that help us analyze and understand how you use this website. These cookies will be stored in your browser only with your consent. You also have the option to opt-out of these cookies. But opting out of some of these cookies may have an effect on your browsing experience.
Necessary Always Enabled
Necessary cookies are absolutely essential for the website to function properly. This category only includes cookies that ensures basic functionalities and security features of the website. These cookies do not store any personal information.
Non-necessary
Any cookies that may not be particularly necessary for the website to function and is used specifically to collect user personal data via analytics, ads, other embedded contents are termed as non-necessary cookies. It is mandatory to procure user consent prior to running these cookies on your website.
SAVE & ACCEPT